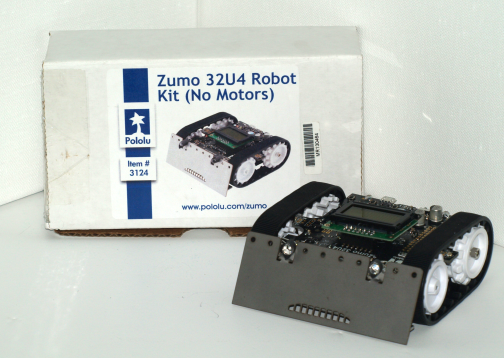 In a previous post I looked at the Pololu Robot shield for Arduino, which was a robot shield on top of which a Arduino UNO R3 plugged into to form a great little autonomous robot.

Today we will be looking at the Pololu Zumo 32U4 Robot, a robot similar in size to the Zumo Robot shield for Arduino, but with quite a few changes. Firstly it no longer requires a separate Arduino board as it has an Arduino compatible micro-controller directly integrated into its main-board. It also has a LCD screen and IR proximity sensors which the previously mentioned robot did not have.

Similarly to the Zumo Robot shield for Arduino the robot also has an expansion area that can be used to connect additional sensors and actuators. As with the Zumo Robot shield for Arduino various different operating source code can be downloaded from Pololu website, that changes the robot into anything from a sumo fighter to a line follower or even an auto-balancing robot, to name a few.

I bought the Zumo 32U4 Robot kit, which required assembly (unlike the Zumo Robot shield for Arduino that only required an Arduino to be plugged in).

Here is a time Lapse of the robots assembly.

I really like the Pololu Zumo series of robots and find them reliable, easy to develop for and a great deal of fun. There are various options available, from fully assembled to kit form depending what you are interested in.

And now that I have two, I can finally have some Robot Sumo fights, so expect some videos of that soon.