This post is a quick update on the Geek robot build so far. A fair amount of trial and error and a bit of experimentation has consumed a lot of my time in the construction thus far. I believe this build will still take a long time because of the vast amount of tasks that still needs to be completed. 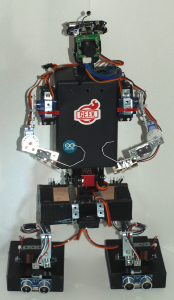 So here is a quick view of the robot so far.

The robot has a total of 14 servos that are allocated as follows: 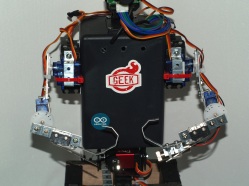 The robots’ head contains two cameras, an Arduino 2 mega pixel camera for static images and a Logitech web cam for video (I removed the web cam housing as it
was too bulky).

The robots’ feet are aluminium housings that will contain the batteries that will power the robot. This is to keep the weight at the bottom of the robot, thus helping to balance it. I am still investigating the exact battery configuration to use as I would prefer a rechargeable option.

I used a fair amount of Timiya universal metal joints during the assembly so far and these are very handy in building any robot.

I plan to mount another ultrasonic sensor and infrared distance sensor on the robots’ back, to allow for the robot to avoid obstacles when it moves backwards.

The robot has a laser diode attached to its one arm, which I intend to use for pointing as well as a point of reference for the webcam.

The next task I will be undertaking will be to start wiring the robot to the Arduino Mega R3 and Raspberry Pi 2 that I intend to use to control the robot. I will post more blog updates as progress on this robot advances.

The Geek So Far – A Work In Progress

The below picture illustrates the size difference between the Arduino boards:

Here is a basic breakdown of the specifications of the three boards:

The Arduino UNO is a good starting point for anyone interested in beginning some Arduino builds, it is a good all round board for most projects and the only real constraint that I have ever run into with this board is running out of digital I/O and Analog input pins for larger projects.

The Arduino Mega overcomes this problem by offering more than double the pins. From a development and ease of use point of view it is almost identical to the UNO.

The Beetle has the least amount of pins exposed, 6 in total, 3 digital and 3 analog, so this can be a serious constraint on the nature of project it can be used for. On the other hand its tiny size makes it possible to use this board in projects where physical size is a constraint (Such as the Insect bot I posted about in an earlier post).

Here is a basic specification breakdown for the Raspberry Pi (Raspberry 2 B):

So, which should you use? Arduino or Raspberry Pi? The answer is… It depends. Both boards have their strong and weak points. Let us look at some key distinguishing points between the two board families:

The Arduino makes hardware interfacing with sensors and actuators a great deal easier. However the Raspberry Pi offers vastly more memory and processing power. So which one to use depends very much on your projects’ requirements.

To put it simply there is no right or wrong choice, use what works for you or simply what you want to use.

This does however not mean that you cannot use both on a single project by setting up serial communication between the 2 boards. I am currently busy doing this on a project (see The Geek under the THE KILLER ROBOTICS FAMILY SO FAR! post).