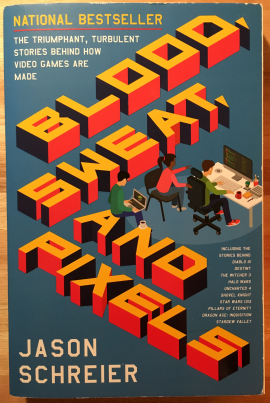 Blood, Sweat and Pixel is a very enjoyable book, containing the stories behind the creation of various video games. It gives the reader insight into how this process is never straight forward nor easy and is rather a perilous journey undertaken by developers out of sheer love for the medium.

The creation process of various video games are covered, from the successful, such as The Witcher 3 and Uncharted 4, to the ill-fated Star Wars 1313.

The book also conveys the sad stories of how many video games outlive the studios that created them, and the reality that very few video game development studios remains afloat in the challenging video game industry.

The reader is also given great insight into the challenges video game developers face, from tight budgets and technological difficulties to dealing with tyrannical publishers. It gives the reader a much greater sense of appreciation for what the developers endure to make their creative visions a reality.

As someone who loves video games and is interested in the development process behind them, I found this book highly entertaining and informative. I struggled to put this book down and would highly recommend it.