I picked up Just A Geek based on the recommendation of various people, and I can say I do not regret doing so.

Just A Geek is the memoirs of Wil Wheaton, of Star Trek: The Next Generation and Stand by me (and Big Bang Theory) fame. It is an honest and brutal look at his rapid rise to fame as a young teen and his subsequent and dramatic fall thereafter. He goes into a great deal of detail describing his love\hate relationship with Wesley Crusher, the character he portrayed on Star Trek: The Next Generation, as well as the doubts and self loathing he experienced as a result of him deciding to leave Star Trek.

In the book he writes of his time as a struggling actor who could hardly find work, to him discovering comedy and being part of a successful sketch comedy group and later starting his blog, WilWheaton.net. Starting his blog resulted in him learning HTML and teaching himself Linux and also helped him rediscover his love for writing. The rediscovery of this love helped Wil redefine himself as an author, helping him find balance and success in his life.

Just A Geek is a really enjoyable journey, starting with a young boy on the set of Star Trek: The Next Generation, more interested in Dungeons & Dragons than Star Trek, to a normal guy dealing with the complexities of everyday life, like paying bills and working on the relationship with his wife and step-sons.

Just A Geek is an inspiring and feel good book that I would really recommend. It shows how life hardly works out how we plan, but even so great things can come from the most unexpected places. 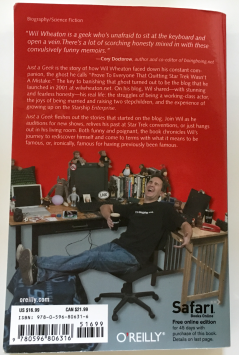 One thought on “Book Review – Just A Geek by Wil Wheaton”