This Killer Robotics Family currently consists of 2 complete robots and 1 work in progress.

First we have the Autonomous Roaming Robot: 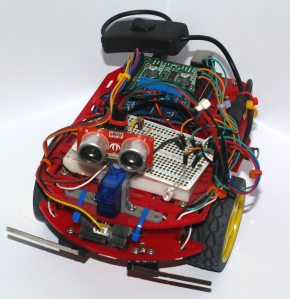 This robot was built on a Sparkfun Magician Chassis and uses a Arduino Uno R3 with a Pololu MC33926 dual motor controller, a HC-SR04 Ultra Sound Distance Sensor (On a micro servo for neck movement), a Sharp IR distance sensor to detect drops, and 2 trigger switches to detect direct contacts with objects. This robot autonomously roams avoiding objects and drops. I will provide a full breakdown on how this robot was constructed as well as the source code running on the Arduino in a future post.

Secondly we have the Insect bot:

This Robot was based on an Instructable article posted by Lumi3005 (http://www.instructables.com/id/Insect-Bot-mini/). It is based on a Beetle board (basically a shrunk down Arduino Leonardo) with 2 micro servos and a IR distance sensor. This robot walks around avoiding obstacles. I will be posting a review and build step-by-step guide for the DFRobot kit of this robot in the near future.

And Lastly we have The Geek: 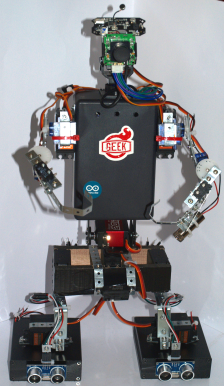 This robot is still a work in progress and is by far the most ambitious robot that I have under taken. It utilises 16 Servos, will utilise 3 ultrasound distance sensors and 2 infrared distance sensors, 2 cameras (a Arduino Camera and a Logitech web cam) and will be powered by a combination of an Arduino Mega R3 and a Raspberry Pi 2. Many posts revolving around this robot, such as progress, lessons learnt and build instructions will follow in the future.

One thought on “The Killer Robotics Family So Far!”